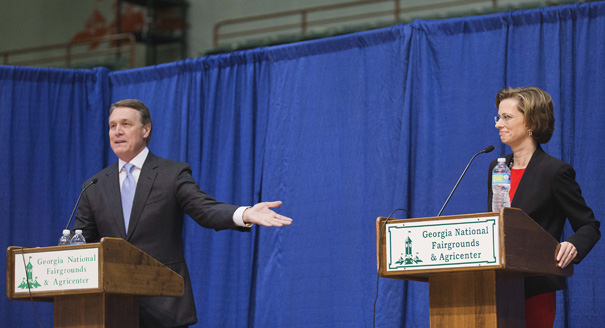 A survey of likely voters and those who have voted early shows tight contests in both the gubernatorial and U.S. Senate races. The survey of 704 likely voters was conducted October 21-22 to home phones (using IVR technology) and mobile devices. It has a margin of error of 3.7% and 95% confidence level.  Crosstabs can be found at the bottom of the page.

Deal and Carter seem stuck in the mud, both below 45% with just seven percent of voters undecided. Carter is trouncing Deal in the age bracket for most new parents (30-44), so his education efforts are paying off. Deal still leads among seniors (65 and over) but not at levels usually achieved by Republicans.

Carter’s percent of support from white voters has dropped a bit but African Americans are now solidly supporting Carter. The most telling part of his survey is the fact that Deal and Carter are evenly splitting the important independent vote (40% each). If that holds there is little doubt that we are headed to a runoff in this race.

Michelle Nunn is now leading among female voters and has a slight lead among independents. And Mr. Perdue now holds only a seven point lead among men. The percent of undecided voters is low in this race and unless something unusual takes place, this race would also seem to be headed for a runoff. But clearly at this point Ms. Nunn has the momentum.