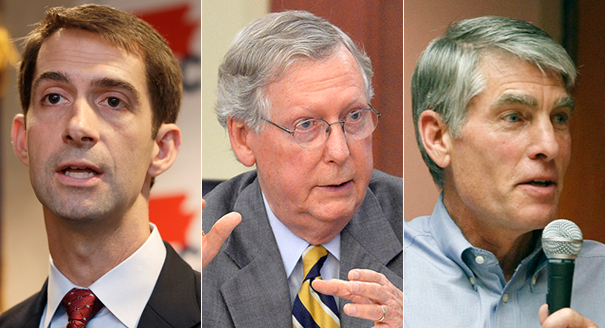 The Republican Party has reached a new high in its dominance of Southern politics. In this year’s mid-term elections, Republicans all but wiped out the Democratic nominees, winning two, and maybe three, new US Senate seats, picking up an additional governorship, and adding another chunk of state legislators.

The GOP won this overwhelming victory by increasing its share of support from white voters and from Latinos. The African-American vote remained nearly 90% Democratic, but even in races where black voter turnout increased over 2010, Republicans prevailed.

There were 14 US Senate contests in the South this year. Republicans won 12 of them outright and are favored to win a 13th on December 6 when Louisiana holds its runoff. The Democrats held on to one heavily favored incumbent, US Sen. Mark Warner (D-VA) but only by an eyelash. The most likely outcome is that in January, Republicans will hold 23 of the South’s 26 US Senate seats, to the Democrats’ three (Warner and Tim Kaine in Virginia; Bill Nelson in Florida).

In US House races, the GOP won four new seats: Carlos Curbelo (FL26), Rick Allen (GA12), David Rouzer (NC7) and Will Hurd (TX23). The Democrats picked up one: Gwen Graham (FL2). That gives Republicans a net gain of three seats. The GOP now has 112 US House seats in the South; the Democrats have 37.

There were eight gubernatorial elections in the South this year. Republicans won all eight, for a net gain of one governor’s mansion (Asa Hutchinson in Arkansas). The GOP now has 12 of Dixie’s 14 governors; the Democrats have two (Kentucky & Virginia).

In the down-ballot statewide races, in the eight states where governors’ races were on the ballot, there were 31 contests for other constitutional offices elected statewide – lieutenant governor, attorney general, etc. All 31 of these elections were won by Republicans.

The Democrats’ biggest problem, intensified in the South, was their failure to win enough white votes. According to exit polls, in ten Southern states, Republicans won the white vote by an average of 42 points, an advantage that even more solid support from black voters and, to a lesser extent, Latinos could not overcome. Nationwide, Republican US House candidates garnered 60% of the white vote. Democrats won 89% of the black vote and 62% of Hispanics.

In North Carolina, for example, African Americans increased their turnout over 2010 by 2 points, but US Sen. Kay Hagan’s (D-NC) share of the white vote declined from 39% in 2008, when she was first elected, to 33% this year. In 2008, Hagan won the votes of whites under the age of 30 by two-to-one; this year, however, Hagan’s opponent, Republican Thom Tillis won the same group by the same two-to-one ratio. The total vote was up significantly in major Democratic counties, such as Mecklenburg (Charlotte) and Wake (Raleigh), 16% over 2010, while statewide turnout was up 7%.

In Georgia, exit polls showed neither US Senate candidate Michelle Nunn (D) or gubernatorial candidate Jason Carter (D) received as much as 25% of the white vote; they needed about 30% to win. One Georgia political observer tells SPR, “The white vote has simply collapsed for the Democrats here, much as it has in the rest of the Deep South.”

In Mississippi, former US Rep. Travis Childers (D) did manage to increase his share of white support from the 8% the Democrats won in 2008 to 16% this year, significant, but hardly enough to affect the outcome: US Sen. Thad Cochran (R-MS) defeated Childers by 60% to 37%.

And in Tennessee, part of the “Rim South,” as opposed to the Deep South, Republican defeats of white Democratic legislators means that for the first time in the state’s history, black lawmakers will now comprise a majority of the Democratic caucus in both legislative chambers.

Nevertheless, every election is a new contest. Democrats could very well remain competitive in the 2016 presidential contest in such states as Florida, Virginia, and maybe North Carolina, where this year’s winners were determined by slim margins. Stay tuned.