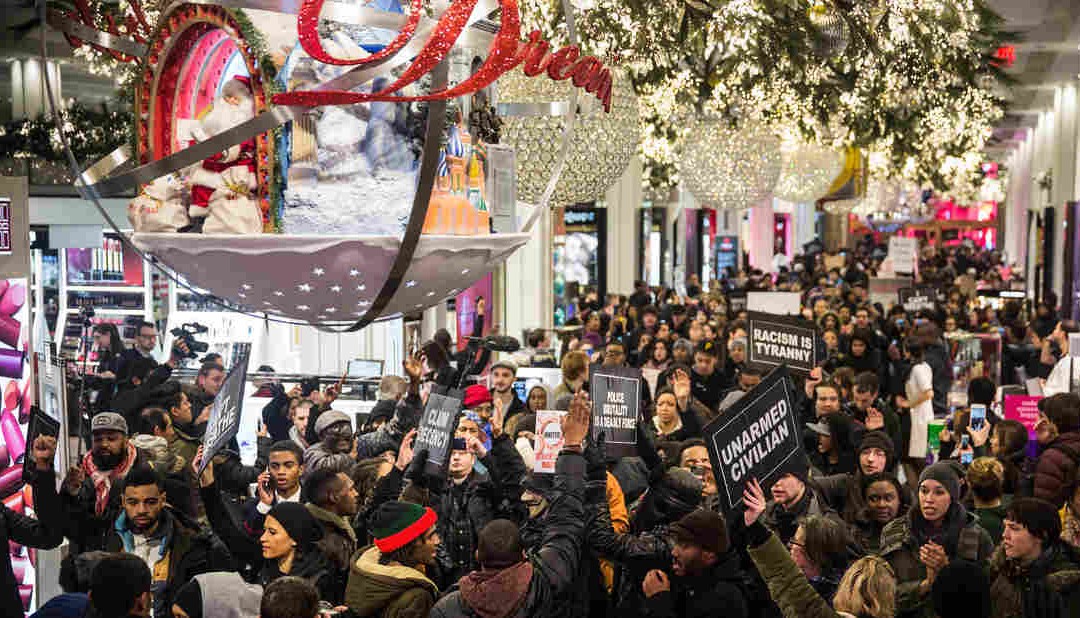 The outpouring of protests that erupted once again following the decision of a New York grand jury not to indict any police officers in the death of Eric Garner has moved police relations with the African American community to the front burner. Coming on top of similar occurrences in Ferguson and in Cleveland, this issue is likely to stay in the limelight for some time.

The issue is not only highly emotional, but also divisive.

E. J. Dionne Jr., writing in the Washington Post, cited a number of statistics from a survey the newspaper took shortly after the grand jury in Missouri declined to indict Darren Wilson in the death of Michael Brown. Among whites, 58% approved of the decision not to indict Wilson to 35% who disapproved. Among African Americans, however, 85% disapproved of the non-indictment, to 9% who approved.

There were other significant divisions as well, with more support for Michael Brown among Democrats and the young, more support for police among Republicans and older people. And 70% of white Southerners approved of the decision not to indict Wilson, the highest percentage in any region, but only 46% of whites in the Northeast.

These sentiments might have changed after the New York grand jury’s decision in the Garner case, where the video alone makes a strong case for an indictment, but racial, regional and political divisions are likely to continue over these cases.

How this all ends is unclear. In the immediate future, the Justice Department, the Department of Homeland Security, and perhaps others in the Executive Branch will move to curtail the use of excessive force by police across the nation. That has already happened in Cleveland, independent of the police shooting death of Tamir Rice, the 12-year-old who was holding a pellet gun. In addition, it would not be surprising if there is a federal finding of a civil rights violation in the Garner case, which provides more evidence of police malfeasance than Brown’s death. New York Mayor Bill de Blasio has announced that the city’s police force will be retrained (a move which prompted a New York Post reference to de Blasio’s “anti-cop agenda”), and other jurisdictions may follow suit.

Other steps that might help include wider police use of body-worn video cameras and more black police officers. Moreover, a prosecutor doesn’t have to be a racist to want to maintain good relations with police officers, which could easily lead to unwarranted leniency when an officer is the accused. This makes a strong case for civilian review boards looking at a case when police kill a perpetrator, black or white. Such a board should include a representative of the police, so at least one member of the board should know what it’s like to apprehend suspected criminals.

These approaches may go a long way toward bringing about fewer incidents of police misconduct, but there is a longer term problem that should also be addressed, and that’s the very high crime rates in low-income black ghettos. Just one statistic, from an article in the Tampa Bay Times: According to the Centers for Disease Control, in 2011, the latest numbers available, 41% of the deaths of black males from ages 15 to 34 were the result of homicide, compared to 3.8% of the deaths of white males in the same age bracket. These deaths of African Americans almost surely were concentrated in neighborhoods where poverty is a tragic way of life.

There is no excuse for police using deadly force when it isn’t called for. But this disproportionate crime rate exacerbates the problem. It brings more African Americans into confrontations with police, thus creating more opportunities for police misconduct. Police may also feel threatened or on edge, and more likely to be trigger-happy, when enforcing the law in a high-crime community. Moreover, any racist instincts cops may have – and one suspects they have some, like many other white Americans – may well be intensified by years of dealing with black perpetrators.

So the national conversation on race should have two components. First, let’s take steps to ensure color-blind law enforcement. And second, let’s all – black and white, Republicans and Democrats – look for some workable policies that will reduce the high rate of violent crime in the poverty-ridden black neighborhoods in so many of the nation’s cities. Given the broad strength of the GOP at the federal and state level, a bipartisan effort is essential.

Two lawmakers, both potential presidential candidates, have already done some noteworthy work on this subject. US Sen. Rand Paul (R-KY) has advocated changing the laws about incarcerating non-violent offenders in drug cases, which disproportionately affect African-Americans. This issue was taken up earlier by US Sen. Jim Webb (D-VA) when he was in office. Other steps could include a program – hopefully supported by civil rights leaders – to encourage witnesses of criminal behavior to testify against the miscreants who help make their communities high-crime ghettos. (“Quit bitchin’ and start snitchin’ ” was emblazoned on a tee shirt worn by an African American in my neighborhood.) And, of course, better education, better vocational training and more job opportunities, as always a tall order.