Time for Coke and McDonald’s to “Carry On” 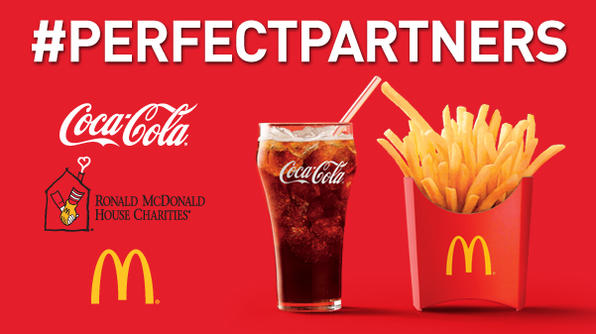 I never thought that I would see the day that two beloved American icons, Coca-Cola and McDonald’s, would be forced to run from their own products and great traditions. But that’s exactly what is happening.

It all started quite some time ago with an innocent push to curb the consumption of sodas on high school campuses, and with a media effort to remind Americans that fast food has too many supposedly empty calories.

But in recent years there has been an all-out war waged against companies such as McDonald’s and Coke in an effort to brainwash an entire generation against both them and what they sell. Sadly, both have been forced to essentially run from their own products in an effort to preserve their companies.

For years, images of happy people quenching their thirst with an ice-cold Coke on a hot summer day filled the airwaves and the pages of every publication imaginable. But under endless pressure from a nanny state that believes we should all be shamed into never enjoying a soda, we see less promotion of the very product that made Coca-Cola “the real thing.” (And diet soda is even under attack for allegedly containing cancer-causing agents.)

Coke has seemingly been pushed around and away from great ads such as the iconic “I’d Like to Give the World a Coke” spot that famously was filmed on a hilltop. Or the classic toss of a football jersey by “Mean Joe Green” to an adoring young fan who was offering him a Coke after a tough game.

Indeed, the greatest beverage in American history has been demonized by leaders who think a soft drink is a dangerous weapon but also that pot should be sold in every store.
If you find that ironic, then just consider the advertising pickle that McDonald’s finds itself in nowadays. With attacks on its products that treat the Big Mac like a weapon of mass destruction, some of the advertising folks at McDonald’s have had to promote their product in a roundabout way. They put together a touching ad that shows various towns where the local McDonald’s sign offered support for the community after a local or national tragedy.

It didn’t take long for the same folks who believe that every calorie the company serves should be displayed in every store and pickup window to somehow frown upon a video montage of these displays of community support and involvement.

So here is a message for the folks at McDonald’s, Coke and every other company whose all-American icons have been put down and bullied under our modern reign of politically correct terror. And the message comes straight from the “controversial” McDonald’s ad’s song — “Carry On”!

Carry on. Keep true to your Big Macs, your fries, your ice-cold Coca-Colas — even that damn ugly clown that I’ve never really liked. Proudly offer to “give the world a Coke in perfect harmony” and see who can recite the recipe for the quarter-pounder the fastest.

And keep on supporting the charities and the communities that you, as beloved corporate citizens, have generously supported for so many years. There are plenty of us who appreciate those McDonald’s signs with their simple messages of caring and support. And some of us can still remember how soldiers fighting to save our very right to freedom and liberty never went without a Coke nearby.
It’s just a plain disgrace when the food police won’t allow us to decide what and how we eat. But it’s even a bigger disgrace when the free-speech police beat up a company for reminding us that they are a part of our national fabric.

We have madmen threatening the world. They block our access to communication and kill innocent victims in acts of unspeakable terror. But many still want to make the enemy a soft drink and a hamburger. In light of the past few weeks, I would say we all have much more to worry about, whether our top leaders want to admit it or not.
And so to the company that literally gave us our modern image of Santa Claus (Coke) and the company that feeds us when other doors are closed or haven’t even opened yet (McDonald’s), I say, “Carry on!” Be what you are, sell what you sell, and do so proudly. We are with you.

Matt Towery is author of the book “Paranoid Nation: The Real Story of the 2008 Fight for the Presidency.” He has served as an elected official, has advised major national campaigns and heads a non-partisan polling and media company. He is also publisher of the Washington-based Southern Political Report, the nation’s oldest active political newsletter. Follow him on Twitter: @matttowery. To find out more about Matt Towery and read features by other Creators Syndicate writers and cartoonists, visit the Creators Syndicate website at www.creators.com.
COPYRIGHT 2015 CREATORS.COM