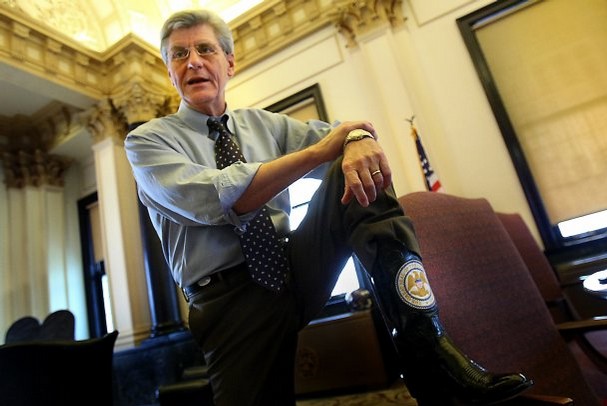 Gov. Phil Bryant (R) was elected in 2011 with 61% of the vote, after winning the Republican Primary with 59%. This year, he is running for reelection. With the February filing deadline fast approaching, Bryant has no opposition so far. “Its going to be just about a walk-in for Bryant…,” says Bill Minor, dean of Mississippi journalists.  “Bryant might get by unopposed.” (Minor, known for his incisive reporting during the Civil Rights struggles in Mississippi, says, “At 92, I’m still getting hate mail.”)

Two Republicans have been mentioned as potential primary challengers to Bryant, but neither is likely to make the race. The better known name is that of state Sen. Chris McDaniel (R), who ran a spirited but unsuccessful race against US Sen. Thad Cochran (R) last year. But a campaign for governor would present different challenges for McDaniel. Hayes Dent, president of a public affairs firm in Jackson, says McDaniel would have several problems, including “fall-out from the 2014 Senate primary,” a very bitter contest that sharply divided the state’s Republicans. Moreover, fundraising for hardcore conservative McDaniel might be more difficult in a race for a state office, mainly devoid of federal issues. Finally, many Tea Partiers are comfortable with Bryant. So the word is that McDaniel is considering a race for either lieutenant governor or attorney general.

The other GOPer getting mentioned for governor is state Sen. Michael Watson, now in his second term. Watson, 37, was a big supporter of McDaniel last year and would face some of the same problems as McDaniel in running against Bryant. In any case, like McDaniel, says a Jackson insider, “Watson is sitting back and looking to run statewide. He’s waiting to see if there an open statewide office.”

As for the Democrats, they “are really struggling to find someone,” says the Jackson insider, noting that party loyalists have tried to recruit Public Service Commissioner Brandon Presley, former gubernatorial candidate Bill Luckett and former Secretary of State Dick Molpus for the governor’s race. But Presley filed for reelection to the PSC and Luckett and Molpus opted out.

Also getting mentioned is former US Rep. Travis Childers (D), a moderate with a populist streak, who was the Democratic nominee against Cochran last year, garnering 37% of the vote. But the death of US Rep. Alan Nunnelee (R) last week created a vacancy in the 1st District (Tupelo, etc.), the district that Childers served in Congress from 2008 to 2011. This might provide a more realistic opportunity for him than a statewide race. (“That special election is going to be huge,” says Dent, with as many as 12 candidates.) In any case, Childers has shown no interest in the governor’s race.

Nevertheless, the Democratic Party’s website solicits money for #FirePhil in 2015, criticizing Bryant for the state’s still-high jobless rate and for “230,000 working people” who are without health insurance, a reference to Bryant’s refusal to participate in Obamacare’s Medicaid expansion program. Minor notes that the state would have received $9 billion had it agreed to participate.

But Bryant’s solid hold on the governor’s office reflects the economic progress the state has made during his tenure. Although Mississippi’s unemployment rate was 7.3% last November, the highest jobless rate of any of the 50 states, it was significantly down from the 9.4% when he took office in January 2012. Moreover, Bryant stays focused on job creation and assistance to low income earners. In his state of the state address in January, he advocated a $50 million expenditure for workforce training, an income tax credit for “working Mississippians” earning less than $52,000 annually, and $3 million for scholarships for those attending technical schools or community colleges.

With an absence of drama in the governor’s race, political attention in the state is likely to be on the down-ballot statewide offices. There’s going to be “musical chairs” in Mississippi, says Dent.

Either McDaniel or Watson might challenge Lt. Gov. Tate Reeves (R), who is not on good terms with the governor.  Already Tim Johnson, a former state senator – and an Elvis impersonator – switched from the Republican to the Democratic Party and announced that he will challenge Reeves in the General Election. In his announcement, Johnson, 55, said, “The Republican Party leaders’ actions against supporting Medicaid expansion and threatening our local hospitals was the final, deciding factor for me,” reported the Clarion-Ledger. (State GOP chairman Joe Nosef said, “[T]his begs the question of whether he’s really been a Republican all these years, or just a Republican impersonator.”)

The other office likely to be contested is that of attorney general. Incumbent Jim Hood is the last statewide Democratic officeholder in the state and continues to be popular. “He doesn’t get involved in controversial issues,” says the insider. “He fought the insurance companies post-Katrina… If he runs again, he should win handily. If he doesn’t, that should be the big race here.”