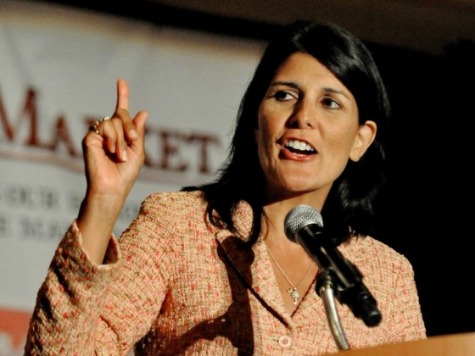 South Carolina’s Gov. Nikki Haley (R) did something unusual in her Republican response to President Obama’s State of the Union address. She made a strong – and good – impression. Not for her the poor delivery and goofs that characterized the GOP responses of Bobby Jindal and Marco Rubio in prior years.

Haley’s speech was marked by reasonable, common-sense points delivered with a genuine demeanor, as if she were talking without a script. As a result, TV’s talking heads had almost universal praise for her. Even reliably liberal CNN contributor Van Jones praised her remarks as something new and important.

Political observers in the South echoed that sentiment.

Susan MacManus, professor of political science at South Florida University, says that in her response, Haley “put a face on the Republican Party very welcomed by young people and women. I see her having a bright future as millennials gain more influence.”

In Greenville, South Carolina, public affairs consultant Chip Felkel says that Haley “took a great opportunity and did a very good job of introducing herself” to the nation.

Ferrel Guillory, director of the University of North Carolina’s Program on Public Life, says that Haley “didn’t come across as particularly charismatic,” but “She came across as a reasonable mainstream Republican. She touched on the Charleston episode she has dealt with amazingly.  In terms of her national profile, [her response] was a plus.”

There was a political shadow to this sunny portrait of Haley’s speech, however. “GOP brass lauds Haley – but not too loudly,” read the Washington Post headline the morning after Haley’s response. “Party leaders who loved governor’s upbeat speech still tiptoe around Trump,” read the sub-headline. And “Haley criticism of Trump stirs furor,” was the headline on the front page of The Hill, an influential Capitol Hill newspaper.

The hesitations were due to the governor’s comment that “during anxious times, it can be tempting to follow the siren call of the angriest voices. We must resist that temptation.” This remark, by her own admission, was aimed partly at Donald Trump.

Were that the end of it, Haley’s vice-presidential prospects would be close to nil. “If Trump gets it, I can’t imagine he would pick her,” says MacManus. Her selection, says Felkel, “depends on who the Republicans nominate for president. If sanity returns, she’s in good shape. But if insanity [prevails], not so much.”

But at the Republican debate in North Charleston, Trump was careful to “make nice” about Haley, agreeing with her that he was angry and generally describing her as a friend.

It is possible that New Yorker Trump was merely cognizant that he was on Haley’s home turf, and that she was in the audience. Another possibility, however, hinted at in some media accounts, is that RNC chairman Reince Priebus encouraged a rapprochement between the two, given that Trump now has a realistic shot at the nomination and Haley made such a positive impression in her state-of-the-union response.

While Haley would bring a welcome balance on many levels to a Trump, Ben Carson, Chris Christie or John Kasich presidential bid, at this point, only Trump in that quartet seems poised to do well in the early voting. And if Haley were on a ticket with Ted Cruz or Marco Rubio, it could be perceived as “too Southern,” a problem already faced by the GOP in some quarters, notes Sabato.

If Trump does secure the GOP nomination, and if the Trump-Haley truce lasts, a Trump-Haley ticket might be a good deal for the increasingly anxious Republicans.

Although Haley would not add electoral votes to the GOP ticket, she does have other assets that would be helpful across the nation. She’s “a woman, a minority, and is now viewed as a moderate conservative since the Confederate flag issue,” says Larry Sabato, director of the University of Virginia’s Center for Politics. MacManus underscores this thought, opining,   “Republicans cannot have another all-white male ticket this year.”

A Democratic spokesperson, responding to Haley’s response, said that the South Carolina governor was unpopular in her own state. But in a Public Policy Polling (D) survey of Palmetto State voters last November, Haley’s approval rating was one of the highest of any governor in the nation – 56% approve, 28% disapprove. She even polled well among heavily Democratic African Americans – 45% approve, 30% disapprove. Though, for whatever reason, only 25% of the state’s voters wanted to see her as the Republican vice-presidential nominee, to 59% who didn’t.

If Trump comes out of Iowa and New Hampshire in good shape, his prospects in South Carolina’s influential February 20 primary are very bright. “If everyone who turns out to hear him votes, and votes for him, he wins,” says Felkel. Moreover, in Winthrop University’s early December poll of the state’s likely Republican Primary voters, Trump was first with 24%, Cruz second with 16%, Ben Carson had 14% and Marco Rubio 11%. Of course, if Trump is weakened by Iowa and/or New Hampshire, Palmetto State GOPers could quickly switch allegiances.

As of now, however, a Trump-Haley ticket doesn’t look that far-fetched. Stay tuned.