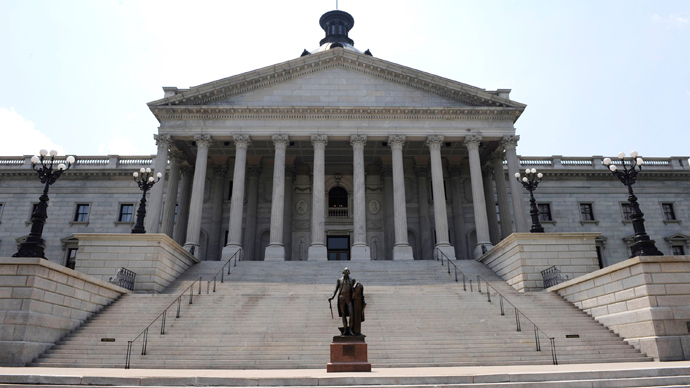 COLUMBIA – South Carolina public schools will continue to display “In God We Trust” in schools, if desired, but state lawmakers are not pushing to require it. A House education subcommittee tabled H. 4395 on Tuesday, dealing a sizable setback to a bill that would have mandated that schools place a plaque or other display in the lobby of each school building with the phrase that Congress adopted as the national motto in 1956. The S.C. School Boards Association asked lawmakers to amend the bill so that the state attorney general, not county schoolboards, would be responsible for fighting any lawsuits to arise.

According to the bill, the goal is “to increase student understanding of and familiarity with American historical documents, historically important excerpts from or copies of the documents should be prominently displayed in public school buildings.” Rep. Alan Clemmons, R-Myrtle Beach, introduced the proposal last December. It has drawn a handful of co-sponsors, including Rep. Lonnie Hosey, D-Barnwell.

The bill states that “In God We Trust” was inscribed on all U.S. currency occurred in April of 1864, when Congress approved its use on 2-cent pieces. “We have amber of social studies members who have expressed concerns,” said Craig King, director of governmental affairs for the Palmetto State Teachers Association. He said members, including some in the SC Council for the Social Studies, wanted to be part of the discussion to suggest changes. Constitutional questions about the separate of church and state has come up in the past in other states. In several circuits, including the 4th circuit, similar language has been challenged, specifically the quote “one nation under god.”

The Supreme Court has refused to address the issue of the national motto being constitutional when displayed in public buildings, according to the committee staff. In 2000 Congress resolved to encourage the display of the motto in public buildings. The bill states that the federal 5th, 9th, and 10th circuit courts have ruled that displaying “in God we trust” is constitutional provided the purpose is to promote the national motto and not a particular religious belief.