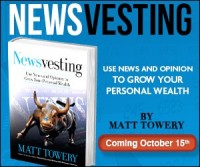 In anticipation of what I openly declared ahead of time as a likely Donald Trump win November 8th, I steadily bought shares of the S&P index fund SPDR (SPY) but hedged by buying shares of one of the many ETFs that track volatility in the market (the VIX), in my case choosing the fund traded as VIXY.

The strategy was simple. Ride the side of the market that would take off with a Trump victory and dollar average into the ETF that lost ground as a result.

At first blush it seemed that a Trump victory would send the U.S. financial markets into a tailspin. Indeed the pre-markets for the late hours following the apparent victory for Trump lost significant ground, only to rebound by the time of the opening bell the following morning.

The S&P had already been rising in the days prior to the election, based on the inaccurate assumption that the Hillary Clinton would be elected our next president. But the weeks that followed showed that Wall Street’s fear of Trump’s temperament and his dislike for some financial institutions, withered as investors considered the implication of future tax cuts, investment in infrastructure, a boost to defense spending, and the likely end to many an anti-business regulation.

So the S&P rose creating what has been dubbed the “Trump Bump.” That provided some immediate gratification financially in short term profits in those purchases of the S&P index. But what of the VIX?

In the interim the question was, which sectors of the market and what companies would reap the biggest rewards in a Trump administration? The obvious ones were some of the picks I selected two years ago when I was writing Newsvesting: Use News and Opinion to Grow Your Personal Wealth. Defense stocks were a great pick for the book—one overlooked by much of Wall Street at the time, but hugely successful in recent years. And obviously, with Trump’s declaration that he will retool our military, they will be in vogue. But more now as a long term investment. After all, the well won’t be pumping right away and in a frothy market, one should very carefully dip a toe into the warm water of a Lockheed Martin (LMT), which for my money, is the most likely of the major defense firms to benefit from a boost in domestic government spending in the coming years.

Infrastructure also seems a no-brainer. And plenty of money has already started chasing the dream of new bridges, roads, and the like. One pick I didn’t chase, but will now, is Vulcan Materials (VMC). As the largest producer of concrete and asphalt it’s hard to imagine that this Alabama-based company won’t receive a “double kiss” for being in the right business and from a super “red” state in coming years. But again, we are nowhere near to future budgets or infrastructure programs under a Trump administration being “concrete.” Immediately after the election Vulcan shot up from the $120 range all the way to right at $138. That was some nice quick money if you timed it right. But for a stock that reached as low as $78 and change in the last 12 months, those prices seemed a bit much. Vulcan tumbled by nearly $7.50 on Monday November 28th. And it could pull back more if we have a major downward trend in the market. So VMC is a newsvesting opportunity, but it too should be acquired slowly over time (I’m starting today!).

I see other companies that have ironically presented decent buying opportunities because they were on the wrong side of either the Trump Bump or the likely rise in the strength of the dollar that should come with increased interest rates and Trump’s economic/trade policies. Philip Morris International (PM) has been hit primarily by issues related to the dollar after taking off to a 12 month high of $104.20 in July, it has lost steam and is now sitting at a far more reasonably priced $90 per share. With a 4.6% yield PM is a stock to start gathering again, not for the short term, but as a long term dividend rich holding.

As I wrote in Newsvesting, it’s great to invest in companies that are friends of a president, and not so much fun to own them when their opponents come to power. Consider Google’s Alphabet Class C stock (GOOG) which was over $780 a share on November 7th but dropped to below $740 by November 14th. In my opinion, Google had itself just as firmly implanted in the Clinton campaign as it was in the Obama ’12 effort. That effort didn’t hurt when several years down the road President Obama virtually commanded the FEC to rule in Google’s favor on the “net neutrality” issue.

Now Google and its Silicon brethren such as Facebook are definitely out of favor. That presents another long term buying opportunity. Google is here to stay and although it will not likely experience the meteoric rise in price per share it witnessed post the “net neutrality” decision, it will be a long term winner that might be a bit more affordable as the Trump administration finds subtle ways to attempt to “even out the playing field” a bit.

Then there are the good old fashioned companies that I believe will ultimately do well with Donald Trump in the White House accompanied by a Republican Congress. Trump’s tax proposals related to repatriation of overseas profits will benefit a company like General Electric (GE), whose mix of businesses were already right up the new administration’s alley. Then there are the energy companies. My old standby Conoco Philips (COP) is a virtual proxy for the price of oil. If OPEC gets its act together it will zoom. If it doesn’t its price will fall making it a great buy and one that will likely flourish under the new government in coming years. I bought and sold COP as a stock, along with puts and calls more times than I can count. If you are attentive it’s a great way to make money, even if you have to take it as a short term capital gain (taxed like your weekly or monthly paycheck).

And about that VIX. Volatility (and a downturn in the market) will ultimately reappear as we march deeper into this already long in the tooth bull market. By springtime the bloom will be off the rose with President Trump and there will come a time of great uncertainty. Financial markets hate uncertainty. That’s when that investment in the VIX will start to payoff. Consider the fact that VIXY increased nearly four times its current price during the early 2016 market selloff. It doesn’t take much to enjoy small blips in the market that are magnified by the VIX. The challenge is to average into it and to have the patience to hold it even as the market rises (and VIX-based ETFs fall).

There will be Trump Bumps and Trump Slumps before the real policies of Donald Trump are truly in place. And then the possibilities are amazing. But that’s for another day.

Editor’s note: Matt Towery’s Newsvesting columns are opinion only and do not seek to provide advice as to when to buy securities or what to buy. Matt always tells readers to seek a broker or Certified Financial Planner in making investment decisions. If you want to read the formula for how Matt uses news and polling to help guide his own personal investments click THIS LINK and make you or someone you know a “Newsvestor” for the holidays.