Alabama: Pride goeth before a fall 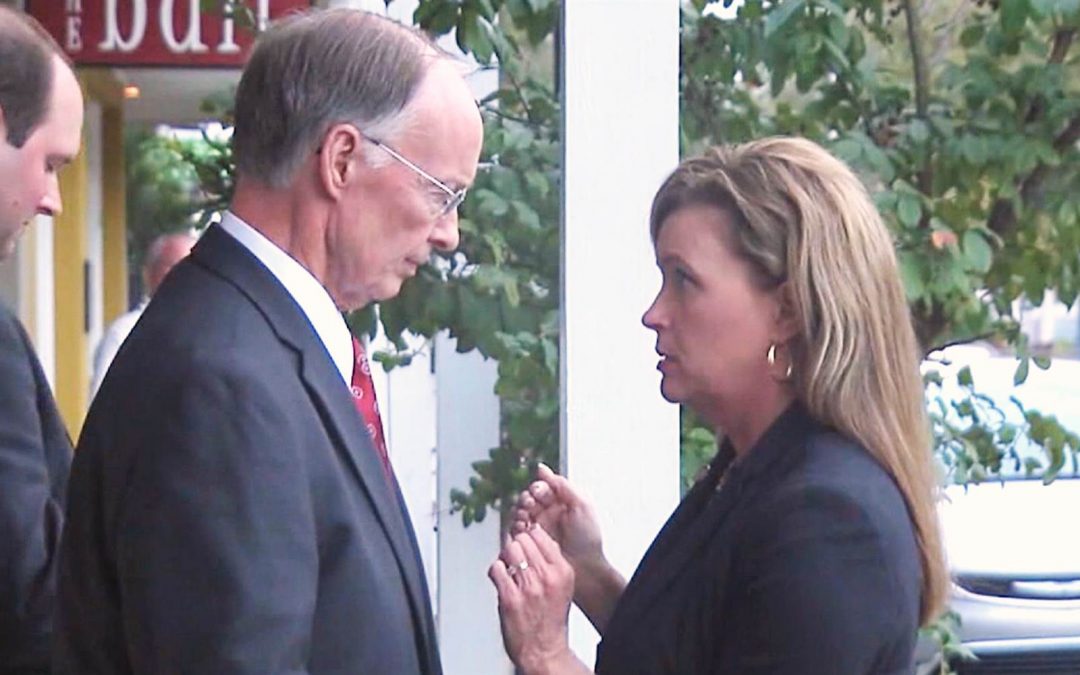 The troubles began when Rebekah Mason, Gov. Robert Bentley’s (R) top political aide, was implicated in Bentley’s firing of a former friend and ally, Spencer Collier, who headed the Alabama Law Enforcement Agency, allegedly for giving evidence in the conviction of former state House Speaker Mike Hubbard (R). Collier promptly went public with an accusation that Bentley and Mason were having an affair, a charge the governor and Mason, who is married with children, denied. Then Bentley’s wife left him and filed for divorce, while his family released tapes containing the governor’s salacious comments about Mason: ‘”Baby, lemme tell you… If we’re gonna do what we did the other day, we’re gonna have to start locking the door.” In another tape, he describes putting his hands on Mason’s breasts.

But over the ensuing months, when then the governor’s conduct or misconduct was not on the front pages, Bentley continued to move around the state performing his official duties. Many observers felt impeachment was not in the cards.

Then late last year, the governor managed to offend lawmakers and other political insiders by appearing with Mason as if nothing had happened, essentially rubbing his behavior in the faces of his critics, wrote al.com’s Kyle Whitmire. Mason was present at the governor’s annual Christmas tree lighting; was in the balcony at his state of the state address, which she was suspected of writing; and accompanied the governor – along with her husband – to President Trump’s inauguration.

Matters came to a head last Thursday when the Ethics Commission issued its report, finding that Bentley had committed four violations of the law, to wit: Used government resources for personal interests, used campaign funds to pay Mason’s legal fees; made an improper loan to his campaign; and accepted an improper campaign contribution. The Commission forwarded its report to the Montgomery County district attorney. If the governor is indicted and convicted, he could face a prison sentence. Bentley filed a lawsuit seeking to block issuance of the report, but the judge declined to do so.

Glenn Browder, Emeritus Professor of American Democracy at Jacksonville State University in Alabama, says Thursday’s report by the Ethics Commission “is significant because it’s the first time an official body has passed judgment on the governor.” He noted they did not assert he was guilty, only that there was “probable cause” that he violated the law, enough to refer the matter to a prosecutor. In addition, state Attorney General Steve Marshall is considering whether the governor broke any state laws that require legal action. Browder, incidentally, during a term in the legislature, introduced the Alabama Fair Campaign Practices Act, which later became law. Three of the four counts cited in the Ethics Committee report were based on the Act.

On Friday the counsel to the House Judiciary Committee, Jack Sharman, issued a 100-page report presenting evidence to be used in an impeachment proceeding. Hearings by the committee will begin Monday, April 10, with a vote up or down on impeachment possibly in May.

Senate President Pro Tem Del Marsh (R), however, called on the governor to consider resigning. “I don’t think it does us any good to have the House go through these impeachment proceedings,” he said, reported NBC News.

Bentley held a news conference on Friday in which he apologized to the people of Alabama for letting them down, but asserted that he had not broken any laws or engaged in any conduct that justified impeachment. “I have done nothing illegal. If the people want to know if I misused state resources, the answer is simply no, I have not.”

In addition, Bentley’s lawyer, Ross Garber, provided details about the conduct cited in the Ethics Commission’s report that suggests they are innocuous, for example, that a contribution Bentley received from the Republican National Committee after the deadline had passed was to reimburse him for travel expenses that occurred before the deadline. Garber also said the findings “are not the kind of thing that results in the impeachment of a governor.”

If the House impeaches Bentley, he will have to step down while the Senate decides whether to convict him. If he is convicted and removed from office, Lt. Gov. Kay Ivey (R) will succeed him as governor.

A poll taken in September gave Bentley an approval rating of 35% to 55% disapproval, ranking him the 8th least popular governor in the nation, according to Morning Consult. The publicity since then has been even more negative for the governor. Stay tuned.