What next in Alabama? 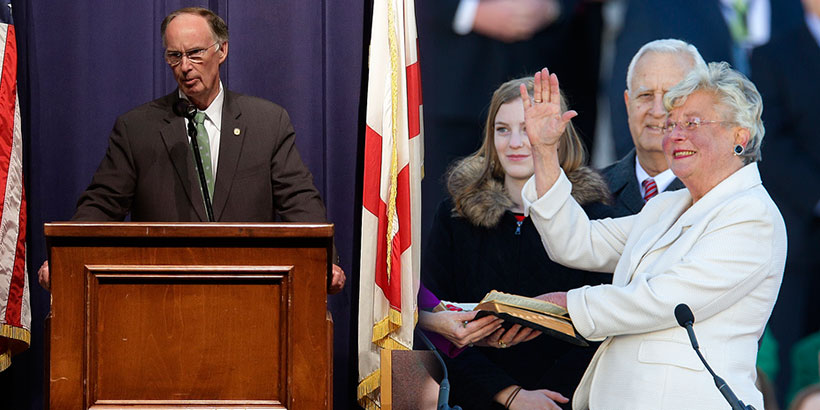 For starters, there’s a political hot potato on Ivey’s agenda. “Will she set a new election for the Senate?” asks Glenn Browder, Emeritus Professor at Alabama’s Jacksonville State University and a former congressman (D); State Auditor “Jim Ziegler and others are pushing her to call for a special election for the US Senate this year. The secretary of state says it is within her power… Some folks connect Bentley-appointed Senate incumbent, Luther Strange, with the scandal.” Strange was Alabama’s attorney general when Bentley appointed him to the Senate, thus interrupting his investigation of the governor.

The possibility of a Senate election this year creates unexpected options for the state’s hungry politicos. “[Former state chief justice] Roy Moore says he hasn’t decided whether he will run for the Senate or for governor,” says Marty Connors, former chairman of the Alabama Republican Party. He adds that although Moore is a major force in the state’s politics, “There’s a ceiling there,” as a number of GOPers regard him as too controversial since he was removed from the state high court for telling county clerks to refuse to marry same-sex couples in violation of a federal court order. But Paul Reynolds, Republican National Committeeman from Alabama, says of Moore, “I think he would probably be strong. We never should have allowed the court to remove him… Roy Moore was wronged… Did he bring it on himself? I don’t know.”

Reynolds also opines that if the legislature had adopted voter registration with party identification, as GOP officials had asked, “We never would have had these problems with this governor, because he would never have become governor.”

The other major political happening will be the emerging contest for governor in 2018. “Everything is very fluid right now,” says Connors. Gubernatorial hopefuls who were looking at a race for an open seat must now consider that they could face incumbent Ivey. “How Kay Ivey governs will affect the next governor’s race… Had Kay not assumed the governorship, I don’t believe she would run for governor. Now that she’ll have the power of incumbency, she might.”

“Kay Ivey is off to a good start,” adds Connors. “She fired the top cop, (Stan Stabler, a Bentley appointee who headed the Alabama Law Enforcement Agency). “She fired Ron Sparks,” whom Bentley appointed to head an agency for Rural Economic Development. “And she fired Rebekah Mason’s husband, which is pretty significant.”

wife and the governor. Linda Adams, Bentley’s scheduling director, told al.com, that even “Ray Charles could see what was going on.”

Sparks departure may not be a total plus, however. Browder noted, “Ron Sparks is not an ideologue and had friends in the legislature. He also had strong financial support from education groups.” Sparks was Bentley’s Democratic opponent in 2010.

At least one other potential candidate for governor, Huntsville Mayor Tommy Battle, had begun moving around the state before Bentley’s resignation. Reynolds says of Battle, “He seems to have his act together. Only thing is he would have to really, really get his name out there. The same goes for Sandy Stimpson, mayor of Mobile. Both are great guys. That type is what the state needs. But name ID is not part of the game, it’s everything. How far outside of the Huntsville area is [Battle] known?”

Another potential gubernatorial candidate has already praised Ivey. US Rep. Martha Roby told the Montgomery Advertiser that “Gov. Ivey is the right person to lead our state through this time and I think that she will do an excellent job.”

Behind these two political realities, a potential Senate race this year and a governor’s race next year, Gov. Ivey and legislative leaders must put the Bentley matter behind them and move forward. Ivey has already begun focusing on the state government’s business at hand, signing legislation that would give juries sole discretion whether to impose the death penalty, a power previously shared with presiding judges. And the GOP-controlled legislature now returns to a full agenda, which includes redrawing the lines in twelve legislative districts, funding the state’s Education Trust Fund, and passing the General Fund Budget.

Some reminders of the Bentley era still remain to be resolved. State Auditor Ziegler will conduct audits of the contents of the three official residences used by the departing governor after Bentley has finished removing his belongings.

As for the Democrats, state party chairman Nancy Worley told al.com that corruption under the Republicans “has spread like kudzu throughout our state,” a reference not only to Bentley but to earlier convictions of GOP state legislative leaders. Given the Republicans’ overwhelming dominance of both state legislative chambers, statewide elective offices, and congressional seats, it is not clear how successful Democrats might be in taking advantage of the state’s latest calamity on the GOP’s watch. But it certainly gives them plenty of ammunition. Stay tuned.