6th Congressional District runoff going down to the wire 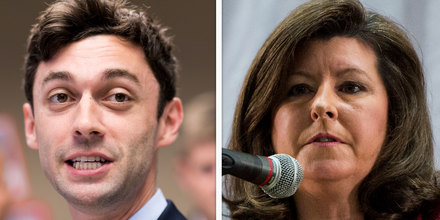 The cruelest part of politics is the numbers. No matter how good the consultants, the message and the advertising, elections are inevitably decided in Georgia by a simple mathematical calculation— did one candidate receive more than 50 percent of the total votes counted? On election night, nothing else matters.

Certainly all the variables from turnout to fundraising can have a significant impact on who gets the most votes. Yet, none alone decide the outcome. Pollsters can be wrong. The most money invested in a campaign does not always win. Pundits’ predictions rarely prove out.

So, when the Secretary of Health and Human Services left Georgia’s 6th Congressional District, few predicted what would happen next. Much like the 2016 presidential election, GOP candidates came out of the woodwork believing that if Donald Trump could win, so could they. That the 6th District was Republican-leaning turf was assumed.

Democrats played a different game. Eyeing the outcome of the 2016 presidential election in the 6th District (where President Trump eked out a less than two percent win), Democrats concentrated their efforts on a single candidate– Jon Ossoff. The hope was that a serious surge of money, resources and turnout in a midterm special election might produce an unexpected win– especially given the deep divisions between the 11 GOP candidates in the race.

By the time the warning bells went off in GOP circles, the Democrats had raised an incredible amount of money, created an impressive get-out-the-vote political machine and dominated the airwaves with pro-Ossoff political advertisements. The effort was so effective that, had the election occurred just one week earlier, the Democrats would have likely had one impressive victory during the first 100 days of the Trump presidency. But, it didn’t.

Now, the gloves really come off and both Democrats and Republicans have much to work with. Ossoff received 92,390 votes in the April special election– an impressive showing in a midyear election. Indeed, when compared to similar elections, he over-performed by as much as 20 percent. More significantly, he still has a lot of room to grow.

Former Secretary of State Hillary Clinton received 155,077 votes in that district. Although a Presidential election, the number does reflect the available pool of votes for Ossoff; now, the Democratic Congressional Committee and its allies must figure out how to get everyone who voted in 2016 as well as a few more to the polls.

Republicans, who dodged a near fatal bullet early in Trump’s tenure, have a more daunting task. Former Georgia Secretary of State Karen Handel only received 37,993 votes in the April special election – or, 54,397 voters less than Ossoff. No matter what the makeup of the district, that is a hefty shortfall for even the most effective campaign organizations.

The harsh GOP reality is that Ossoff only missed winning an outright victory by 3,653 votes out of 192,084 votes cast. But, unlike horseshoes and hand grenades, close does not count.

As the June 20 election runoff approaches, both campaign organizations will focus the majority of their fire on an enormous ground operation. The candidate who gets the most folks to the polls in early voting and on election day wins. It is as simple as that.

There will be some campaign advertisements, but these are mostly designed to make sure voters think their candidate is fighting and can still win. But the real battle will not be air war; it will be a ground war.

Post-special election polls really show the election as about even. Polls are irrelevant. Asking a voter if they intend to vote means little in the context of folks who actually vote. Ignore them.

The real numbers will be who votes early, who requests absentee ballots and then who shows up on election day. Those are the only numbers that will count and that is simple mathematics.

Of course, it is possible for either candidate to have an embarrassing gaffe or for the national political dynamics to sway voter sentiment in the district. But, absent that, this is an election decided by simple hard work– knocking on doors, making phone calls, visiting voters and getting them to the polls. It is all of the things that President Barack Obama did well in 2008 and 2012, and the Republican National Committee perfected in 2016.

All other things being equal, Ossoff has the shortest distance, but Handel has the momentum. How it finishes will be down to the wire.