Is Abbott the invisible Texan? 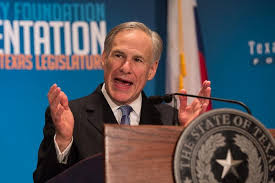 Former Gov. Rich Perry (R-TX) twice ran for president and is now Secretary of Energy in the Trump Administration, an important post for his oil-and-gas rich state. US Sen. Ted Cruz (R-TX) made a powerful, though ultimately failing, run for the White House in 2016 and, once a pariah among his colleagues, is now seen as a key figure in helping construct a repeal-and-replace health care bill. US Sen. John Cornyn (R-TX) is Senate Majority Whip and former chairman of the National Republican Senatorial Committee.

But incumbent Gov. Greg Abbott (R-TX) – Greg who? – is mostly obscure in the national media, and not much more of an imposing figure among his fellow Texans. Lt. Gov. Dan Patrick (R), an articulate righter-than-thou politician, is a much more visible figure in Lone Star politics. Abbott is hoping that may change in the special session he has called for later this summer. If Abbott can get his agenda passed, which mirrors the state GOP platform, he will become the Republican hero in Texas.

The special session begins on July 18 and will last 30 days; it is a belated effort by the governor to grab the reins of power. The governor has listed an agenda of 20 items he wants passed in the session. The first item on Abbott’s agenda is passage of the Sunset Safety Net bill, which keeps the state’s medical board operating; it licenses doctors. Also among the 20 items, controversial legislation to ban municipalities from passing ordinances that would protect transgender people’s access to the public restroom of their choice, aka “the bathroom bill;” additional requirements on abortion providers; and limits on property taxes.

Abbott has gotten some significant support for his special session agenda from the Republican Party of Texas. The state GOP executive committee recently elected James Dickey, a “movement” conservative, as its new chairman. He quickly pointed out to the committee that the governor’s agenda is mostly from the party platform, which the majority of delegates had ratified one by one. The party has generally stayed out of legislative fights, but Dickey seems to be putting the GOP’s muscle behind Abbott’s agenda.

In addition, Abbott also got a boost from his potential rival. Patrick called the special session agenda “big and bold,” adding that it “solidly reflects the priorities of the people of Texas.”

But if Abbott is to become a major, if not central, figure in Texas politics, he will have to learn to be a much more aggressive figure in his relations with the legislature.

As governor, says Harvey Kronberg, publisher of the Houston-based Quorum Report Kronberg, Abbott has “remained aloof, not exercising power in any meaningful way.” For example, Abbott’s big issue was an expanded pre-K program, which right wing Republicans opposed. But Abbott did not have the backs of the state representatives who supported it and “disappeared in the primaries,” leaving a lot of lawmakers feeling betrayed. Moreover, he often relies on House Speaker Joe Strauss III to kill “bad” bills, but doesn’t take a stand himself.

Adds an Austin insider, Abbott “has very good general approval ratings, due in part to his life story [he is in a wheel chair caused when a tree fell on him when he was jogging]. “But talk to Republican insiders and legislators and the reviews turn more negative. He’s very, very cautious and the staff around him is even more cautious. When conflicts arise over the details of legislation he favors, he doesn’t make decisions that might settle the matter on his terms… Lawmakers can’t get guidance from him.”

Abbott, now 59, served on the Texas Supreme Court, then won election as state attorney general, a position he held for three terms. As the state’s top lawyer, his big moment came when he successfully argued for the right of Texas to display the Ten Commandments in front of the state Capitol. Noting the governor’s background in the judicial system, Kronberg adds, “He is not legislative savvy.” Then in 2014, Abbott was elected governor, with 59% of the vote.

Although Patrick promised several years ago that he would not challenge Abbott in a 2018 primary, “The lieutenant governor is more colorful. He’s a former talk show host. He has pretty much seized the mike from the governor,” says Kronberg. He adds, “The governor and his staff believe that Patrick wants to primary him.”

If Abbott doesn’t succeed in the special session, Patrick, who has been shepherding conservative legislation through the Senate, will remain the Texas GOP’s central figure.

As Cal Jillson, political scientist at Southern Methodist University, told the San Antonio Express-News, “It really did increasingly look over the course of the regular session as if Patrick was driving the process… And he’s got to push back against that. He can’t seem to be driven by Patrick. Otherwise, what’s the point of being governor?” Stay tuned.