Kentucky: Mini-Trump Bevin holds his own 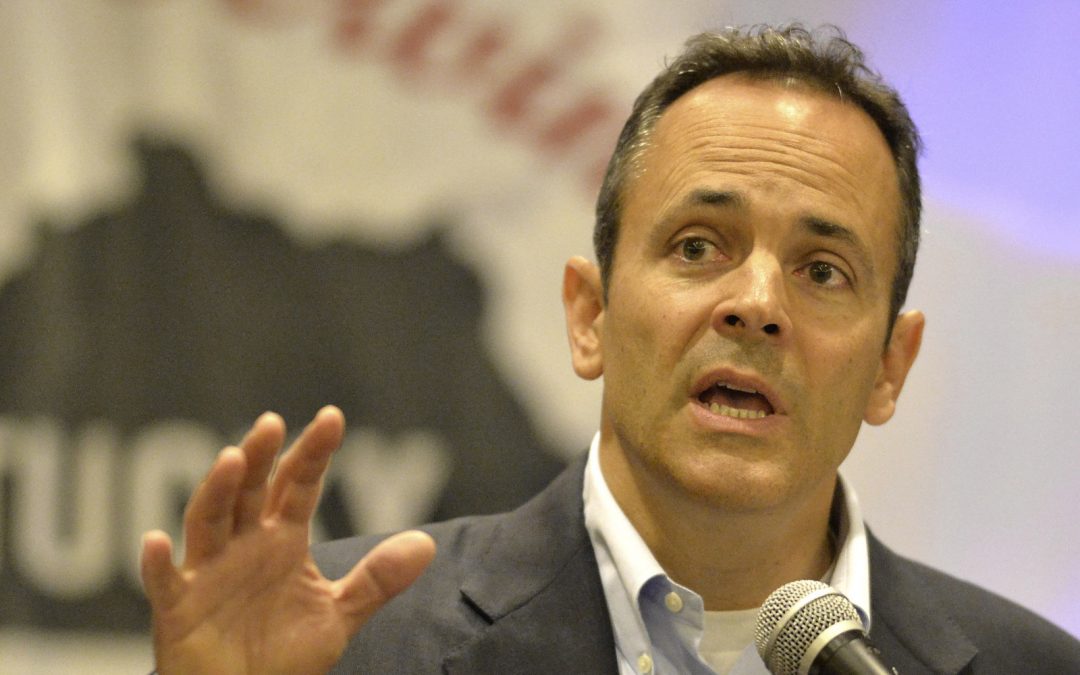 Matt Bevin, a successful industrialist with deep pockets and Tea Party support, surprised the establishment and the media when he won the Republican Primary for governor in 2015. Then he won the General Election, becoming “an unlikely beneficiary of the Republican trend we’ve seen for two decades,” says Al Cross, longtime Kentucky political journalist.

Bevin quickly gained the nickname of Mini-Trump. “Retrospectively, his election as governor of Kentucky was a precursor to the election of Trump,” says Dale Emmons, a Kentucky Democratic consultant. “We immediately saw some parallels” with Trump says Cross.

Like President Trump, Gov. Bevin has been through a stormy time since taking office, with conflicts with the state attorney general, feuds with the news media and with community activists. But, also like Trump, Bevin has maintained his standing with those who voted for him; indeed, he has managed to increase his popularity.

However, Kentucky Attorney General Andy Beshear, a rare Democrat holding a major office in the state, called on the governor to revise his plans to comply with state law. Nine days later, Bevin issued new orders that were modified to some degree, but Beshear nevertheless filed a lawsuit seeking to nullify the reorganization orders. Said Beshear in a statement, “The governor’s refusal to rescind or materially alter his unconstitutional executive orders” reorganizing independent education boards led him to file the suit.

In addition to his legal problems with the attorney general, Bevin’s attempt to reduce violence in the West End of Louisville met with a mixed reaction.

On June 1, he hosted a jam-packed meeting of black leaders, including many ministers, and recommended that small prayer groups walk blocks in the high-crime neighborhoods two or three times a week for a year. Some critics booed the governor and others walked out. Their main objection: Bevin offered no additional funds for education, housing or job creation in the high crime ghettos. However, a number of those attending praised Bevin, noting that he was the only governor that had come to the area to try to solve their problems. The governor said he planned to offer additional proposals on this topic in January.

And, like President Trump, Governor Bevin’s relations with the media are lousy. The Louisville Courier-Journal’s Tom Loftus reported that the governor had bought a house for $1.6 million, substantially less than a recent county evaluation of $2.3 million. Moreover, he purchased the house from a man he had appointed to the Kentucky Retirement System Board. When Bevin denied he had moved into the house, Loftus knocked on the door and a state trooper answered. Bevin called Loftus “a peeping Tom” and “sick,” prompting the state journalists’ association to issue a statement accusing the governor of character assassination. And Bevin has on occasion excluded, or tried to exclude, members of the news media from his press conferences.

“He’s a very unconventional governor, but that may have helped him,” says Cross. “He does not have much of a network, but is adept at social media and uses it to expand his base,” says Cross. He has more than 90,000 followers on his Facebook page and some 26,000 on his Twitter account.

Bevin has, however, come under criticism for blocking some users; a total of some 600 accounts have been blocked.

The governor’s staff told the Courier-Journal users were blocked for “repeated off-topic comments” or obscene postings. One example, a pro-choice voter posted a picture of Governor Bevin with, as the Courier-Journal reported, “an anatomically correct drawing of female genitalia” superimposed on the governor’s face. This follower was blocked. Some voters, however, complain they were blocked simply for posting views critical of Bevin’s policies. Whether government offices have the right to block access to their Facebook or Twitter accounts has yet to be settled in the courts.

Bevin’s relations with the GOP establishment, including Senate Majority Leader Mitch McConnell (R-KY), have been cautious and complicated. Bevin ran to the right against McConnell in the Republican Primary in 2014. He got 35% and then declined to endorse McConnell in the General Election. When Bevin won the gubernatorial primary in 2015, McConnell issued a terse congratulations, ending with [I] “endorse him for governor.” “McConnell is very good at forging working relationships with people he doesn’t care for personally,” says Cross. He adds, “They do a good job of staying out of each other’s way.”

Despite these problems, Governor Bevin is doing well with the public “He’s doing better than I anticipated,” says Democrat Emmons. “He’s popular here in Kentucky in the same way as Trump is in the rest of the nation.” He adds, “Trump is still pretty popular in Kentucky.”

In a Morning Consult survey released on April 11, Bevin had an approval rating of 50%, which ranked him 34th in popularity among the nation’s 50 governors. This was an improvement for Bevin, who had a rating of 33% in the same firm’s poll in May 2016, the lowest in the nation. The numbers suggest that his style and policies sit well with Kentucky voters.