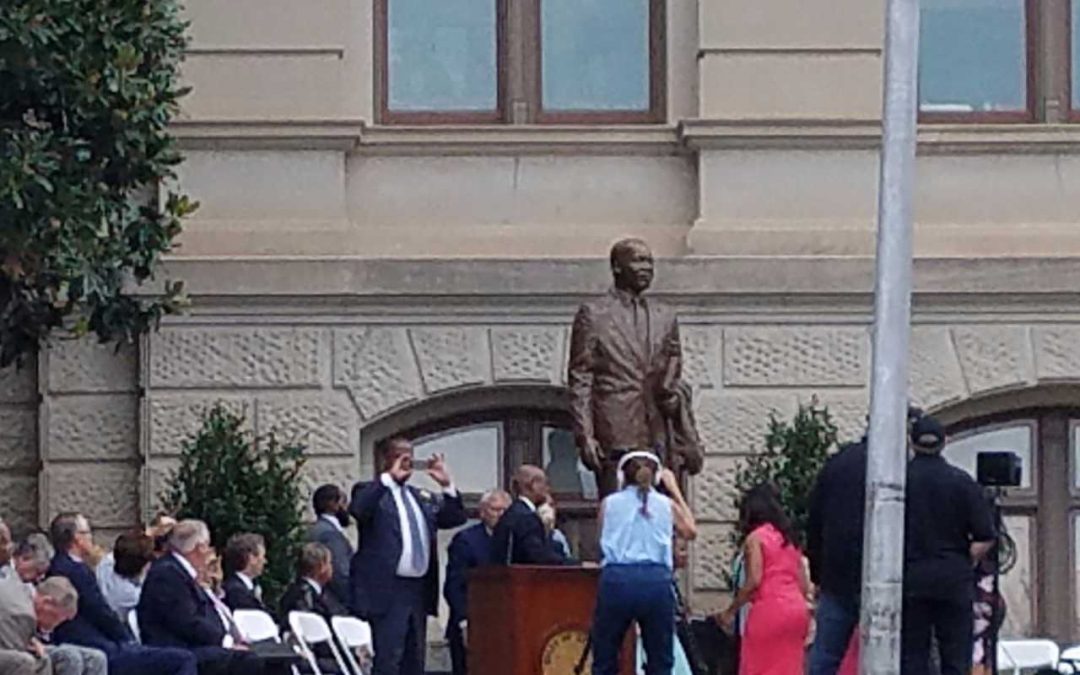 On Monday, the 42nd (Joseph E. Brown),  53rd (Joseph G. Brown),  66th(Richard B. Russell), 67th(Eugene Talmadge), 69th (Ellis Arnall), and 76th (Jimmy Carter) governors of Georgia were joined by a minister, Martin Luther King Jr., on the Capitol grounds in Atlanta. All of Georgia’s finest turned out to unveil the newest statue commemorating the contributions of a great Georgian. Amidst the news from Charlottesville and ongoing discussion about the fate of Confederate-related monuments, the unveiling of the statue seemed even more poignant.

A large crowd turned out on what was an unusually windy and cool August morning on the 54th anniversary of King’s “I Have a Dream” speech. Senator Johnny Isakson, Representatives Sanford Bishop, David Scott and Karen Handel, Lieutenant Governor Casey Cagle, Speaker David Ralston, Atlanta Mayor Kasim Reed and Governor Nathan Deal were all on hand, along with a number of other local and state officials. Members of the King family were also in attendance, including daughter Bernice King, who is the Chief Executive Officer of The King Center.

Atlanta’s resident tenor, Timothy Miller (who you may have seen sing at a Braves game), gave a stirring rendition of Georgia On My Mind to open up the hour long ceremony. Cagle, Ralston, Reed and Deal all spoke about what the addition of King meant and offered some brief remarks about his life. Rep. Calvin Smyre (D- 135 Columbus), the legislature’s point man of sorts for the statue’s administrative side, also spoke.

Ralston spoke about what was a central part of King’s life. “While Dr. King’s life was tragically and unjustly cut short, his legacy stands as a testament to the responsibility entrusted to us by God. We have the responsibility and the duty to seek equality and justice. We are charged by our Creator to strive for righteousness.” King set an example for all Americans in trying to answer this charge.

“We are gathered here today to celebrate the completion of a years-long effort to commemorate the life and works of Georgia’s own son, Dr. Martin Luther King Jr.,” said Deal. “Dr. King’s legacy is one of hope. He gave, and continues to give, men and women a reason to believe and to dream. He expanded the aspirations of future generations. The America we know is a better place because one man followed his conscience.”

Smyre finished out his speech with some words that be familiar, quoting and paraphrasing King. “I say to you today, my friends. And so even though we face the difficulties of today and tomorrow, I still have a dream. It is a dream deeply rooted in the American dream. I have a dream that one day this nation will rise up and live out the true meaning of its creed: “We hold these truths to be self-evident, that all men are created equal.”

“As we unveil this statue of Dr. King, I am inspired by the words and works of Dr. King. And I say to you all on this day, “we should not wallow in the valley of despair. The difficult days ahead of us require leadership at the table of brotherhood, working together to become a mighty stream but not drinking from the cup of prejudice, bitterness and divisiveness. Today is a defining moment in our state’s history. Let’s not quander but instead, let’s take advantage of this moment.”