Matt Gaetz: The son also rises, and then some 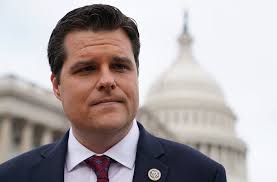 US Rep. Matt Gaetz (R-FL) “kind of followed his father up the ladder,” says one long-time observer of Sunshine State politics, noting that Gaetz’s father, Don Gaetz, was elected Okaloosa County school superintendent and was given credit for turning the district’s schools around. Later, the senior Gaetz became president of the Florida Senate and was still serving while his son Matt was in the state House.

“His name politically is kind of the gold standard,” said one political operative.

But if Matt Gaetz got a boost from his father’s name and political muscle, he has since established a place in politics both in Florida and in the nation’s capital that has quickly surpassed his father’s prominence.

In the last two weeks or so, Matt Gaetz has appeared on an array of national media outlets, including, at a minimum:

CNN, where he had a contentious interview with Chris Cuomo, Fox News (“He’s what Fox News is all about,” says one GOPer),

and the Washington Examiner.

Politico summed it up when it called Gaetz “a provocative and increasingly ubiquitous cable news guest.”

And that’s all while Gaetz is a freshman, a species usually neither seen nor heard from until they have been seasoned at least by a couple of terms.

“Even in the legislature, he managed to be in the news,” says one South Florida source. He grabbed on to some high-profile issues early and stayed with them till he prevailed, including legalizing medical marijuana, which is now the law in the Sunshine State after encountering fierce opposition early on. He has continued to push this issue in Congress and is planning to introduce legislation to allow military veterans access to medical marijuana, a move supported by many veterans groups, including the American Legion – but not supported by Attorney General Jeff Sessions.

Gaetz’s legislative, political and media success can be attributed in large part but to his unusual skill as a debater. Susan MacManus, professor of political science at South Florida University, says that “Two representatives, one Republican and one a Democrat, have told me how good he was at arguing his points. He was articulate and very conservative on just about every issue.” One Tallahassee source describes Gaetz as “very articulate, very bright, a good debater.”

Another part of Gaetz’s success lies in his district, which is the most Republican in the state. It is way up in North Florida, which is the most Southern part of the state in character. In addition, it is home to a number of military bases, mainly naval air stations. Donald Trump carried the district by 40 points – 68% Trump, 28% Hillary Clinton. So he can defend Trump and take the “right” side on issues with little fear of political backlash.

And he takes “the right side” with relish.

For example, while other Trump loyalists were denying that the president had used the word “sh*thole” to describe Haiti and other countries, Gaetz told MSNBC, “I would not pick those terms, but I would say that the conditions in Haiti are deplorable, they are disgusting… I mean, everywhere you look in Haiti, it’s sheet metal and garbage when I was there.”

When the FBI lost files for the same months sought by a GOP House Committee, Gaetz said on CNN that it was “the biggest coincidence since the Immaculate Conception.”

And he told one interviewer that when the Nunez memorandum was released, Democrats and most of the news media are “going to be like cornered rats,” adding that the Mueller investigation “is built on a rotten foundation.”

Gaetz’s sharp tongue, while it makes for good TV talk, also has made him some enemies. The Buzz, a column in the Tampa Bay Times, named Gaetz one of the winners of 2017 Florida politics, but dubbed him “a loudmouth,” roughly the same opinion most Democratic and some Republican politicians in Florida have of him.

Moreover, Gaetz made a slip-up at the State of the Union. At the request of a fellow member of Congress – whom Gaetz declined to identify – he gave an extra ticket to the event to Chuck Johnson, 29, who has been barred from Twitter because he’s been accused of being a holocaust denier and a white nationalist. Johnson denies those characterizations of his views, which Gaetz says he knew nothing about. The two do agree on cryptocurrencies and marijuana, however.

Gaetz said of Johnson, “Unquestionably I don’t agree with everything Chuck Johnson has said and done. That needs to be said on the record. But he was a perfectly polite guest.” Johnson told Politico, “I like weird guys with a f*ck-you attitude. And Matt Gaetz is one of those dudes.” Indeed, he exhibited his chutzpah at the SOTU, where took a selfie with President Trump.

For all his plusses and minuses, Gaetz is an ambitious political figure with the potential to make a bigger mark in both Florida and in Washington.

“Looking down the road, he’ll run for something,” says a knowledgeable observer of the state’s politics. “Maybe Washington-oriented, where he could work his way up to the leadership.” He added that a statewide bid this year “would probably be a stretch.” And looking at the next several election cycles, there are no good opportunities for Gaetz to run statewide.

Says the Republican operative, Gaetz “is positioning himself perfectly to win a primary statewide, but too far to the right to win in the General.” Moreover, while Gaetz is well-known in the Panhandle and much of North Florida, he is not known, much less popular, in the rest of the state.

In any case, Matt Gaetz is a name to watch. Stay tuned.