Cruz vs. O’Rourke: Upset in the making? 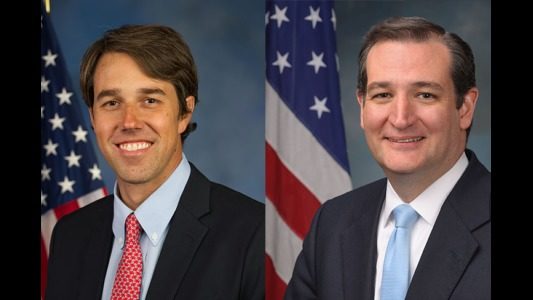 “It will be the premier race in the whole country,” says University of Houston political scientist Richard Murray. The reelection of Texas US Sen. Ted Cruz (R), once considered a slam-dunk, is now a highly competitive contest between Cruz and US Rep. Beto O’Rourke (D). The latest average of five polls in July and August by Real Clear Politics showed Cruz with 45.8% to O’Rourke’s 41.4%. The most recent poll, by Emerson College in late August, showed Cruz with 39% to O’Rourke’s 38%.

“Cruz is taking it seriously,” says Murray. “He’s making deadly attacks on O’Rourke,” charging that he is out of touch with Texas values and has Hollywood backing, suggesting the Democratic candidate is more leftist than he likes to appear.

“Cruz has pretty well solved his problems with self-identified Republicans,” says Harvey Kronberg, publisher of the Houston-based Quorum Report. “But he is wobbly with independents and Democrats… The odds favor Cruz because there are more Republicans in the state.”

In an effort to boost Republican enthusiasm, and turnout, President Trump has agreed to come to Texas to campaign for Cruz. Observers aren’t so sure, however, that the Trump’s appearance will help Cruz. Murray says Trump is “probably not a help at all” to Cruz. And Kronberg goes further, saying, “The biggest problem for Cruz is a guy in the White House holding a grenade with the pin half-pulled.” (A word of caution: Trump’s appeal is often underestimated.)

Despite the odds favoring an albeit-narrow Cruz victory, “There is definitely a path for O’Rourke,” says Kronberg. “The camera likes O’Rourke… [and he] is charming, energetic and enthusiastic.” Cruz, on the other hand is acerbic, but nevertheless a highly skilled debater, having argued many cases before the US Supreme Court.

Despite their contrasting styles which would indicate that O’Rourke is younger, the two men are about the same age, Cruz 47 and O’Rourke 45.

While O’Rourke started out as an essentially unknown property, he has worked double-time to get known. He has campaigned in all of the state’s 254 counties, where he gets lots of free exposure from the local media. Says Kronberg, “He introduces himself and inoculates himself against Cruz’s negative ads to some extent.”

To win statewide, any Democrat has to run strong on the Tex-Mex border. In the Democratic Primary, O’Rourke’s weak spot was the border, but now “he is packing houses on the border,” says Kronberg.

Another factor helping O’Rourke is that the Democrats “have a bunch of good congressional candidates,” says Murray, many waging well-financed campaigns, which will encourage more Democrats to vote.

The same is true for state legislative races. The current lineup in the Texas House of Representatives is 95R, 55D. “As many as 15 Republicans are in jeopardy, or maybe 7 to 10,” says Kronberg, which should also give a boost to Democratic turnout. “Republican polling shows a whole bunch of legislators are in trouble,” says Murray.

One reason for the added competition in legislative races is that voters are more concerned about state/local issues. One example of this trend is that Gov. Greg Abbott (R) is now touting his own support for funding for public education.

On the negative side for O’Rourke is some doubt whether the Democratic organization, weakened by several decades of defeat, will turn out the party vote.

On balance, given the strong record of Republicans in Texas and the state’s recent history of robust conservatism, give Cruz the edge. Leans Republican.